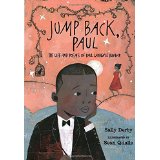 This well-researched, excellently written biography of Paul Laurence Dunbar will be one that middle school and high school libraries will definitely want in their collection. Along with Dunbar’s life story, Derby also gives the reader a sampling Dunbar’s poetry.  She tells the reader how to read the dialect poems so that the words sound like actual speech.

The facts about Dunbar’s life are delivered in a chatty style that make the reader feel as if Derby were talking directly to him or her. She even uses the first person pronoun, “I” at times to make the reader think that she has first-hand knowledge of what she is telling him about Dunbar.  Sean Qaulls completes the book with his pen and ink sketches for the book.  I loved the use of pen and ink as the medium for the drawings since the book itself is about a man whose life was using pen and ink. Derby presents us with a chronology of events that affected Dunbar’s life.  She includes extra notes and information about each chapter, a bibliography for those who want to know more about him, and an index for the researcher.

I suppose that Derby could not cover everything about Dunbar’s life, and perhaps some of the facts, such as his alcoholism and drug addiction, might be difficult for younger readers to fully understand.  However, I think she paints his wife, Alice, as more of a villain than she actually is.  Her parents were upwardly-mobile blacks and were very upset that she had married a man with such dark skin. Dunbar’s mother was upset that he had chosen Alice over her and that Alice was very light in color.  I believe that both sides had a great deal to do with their separation, and I think it was especially sad that Alice did not receive any communication from his mother when he became very ill.  Alice had asked a family friend that she be notified if he got worse because she wasn’t on good terms with his mother; however, that friend suddenly died shortly before Dunbar passed away.  None of this changes my opinion about the quality of this book.   I still highly recommend it for upper elementary and high school readers.