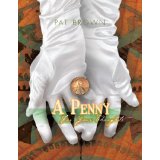 Today we are experiencing much racial unrest and divide in our society. I would like to offer my book, A Penny for Your Thoughts, as a way of discussing racial differences with a Christian perspective.  How a little boy begins to understand the reason for differences of skin color is theme of this story.

This book began to take root in my mind many years ago while I was attending college. I started to think that our racial problems would begin to disappear when enough intermarriage occurred so that we were all tan or brown in color.

However, as time went on I began to learn that we need to appreciate our differences, and that God didn’t make a mistake when He mad us different in color.

Time passed and my daughter married an African-American (He gets upset when I say that.  He says, “I am an American, and I have black skin: I am not some hyphenated American). I use that phrase because it seems to be the most acceptable one for our culture in spite of what my son-in-law believes.  My daughter had two boys. The older of the two has lighter skin than his brother.  The younger boy asked me one day when he was about three, “Grandma, when will my skin look like yours and mom’s.” I told him that it would never look like ours, but that wasn’t a mistake because God made him just the way he should be.

From that conversation grew the story you will find in A Penny For Your Thoughts.  It is available from me or through Amazon. A few libraries also carry it. It is a picture book intended for Pre-K through grade two – or as a read-aloud.