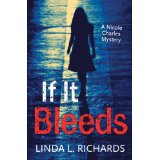 Linda L. Richards, author of the Charlie D. series, introduces a new sleuth to us in the form of Nicole Charles, a newspaper writer.  Nicole was offered a job with a major newspaper as a gossip columnist.

Although Nicole accepted that job, her real desire is to become an investigative reporter. While attending the opening of a new art gallery, she stumbles upon a body in a dark alley.  The body is that of the artist who was featured in the opening.  The unusual thing was that he was stabbed with an antique icepick.

Nicole begins her investigation to find her efforts somewhat thwarted by her boss, who allows another, more experienced journalist to take the lead on her story.  Nicole is determined to discover the identity of the killer and to prove to her boss that she is not just a writer of gossip columns.

Richards has crafted a good mystery for the reader.  It builds suspense and tension right up to the end. Although the protagonist is an adult, the material contained in the book will not be objectionable to any high school library.  The text is designed to appeal to any reader who may experience some difficulty in reading. I recommend this book as an addition to your mystery collection in high school and in public libraries.