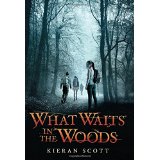 Callie Valesquez is forced to move to a small town when her father takes the family away from Chicago to live in upstate New York. Callie has always been thought of as a nerd in her old school, but she is determined to find friends and fit into their lives, which explains why she agreed to go on a camping trip with them one weekend even though she is a city girl.

The fact that her new boyfriend, Jeremy, was going also didn’t hurt. She has never been camping, never slept outdoors, and is basically scared to death of the idea. And, that was before her friends tell her a horror story of a maniacal murderer who is said to inhabit the woods. Things begin to happen, and one of the group gets killed. Now she has to try to get out of the woods and learn who she can really trust before she ends up dead also.

This is a great horror story for teens. I definitely recommend it for any high school reader. In spite of the possibilities of sex and drinking that one might associate with a group of teenagers out in the woods, nothing of that nature occurs. What awaits in the woods is a lot more dangerous.