Any reader of this book will never look at small-town America and its foster care systems the same way again.  In the beginning of the book, Grace plots out how she can kill her sexually abusive brothers and get away from her family. She finally decides to grab all the money in the house that she can find and leave.

She ends up in a small town in Montana when her money runs out, and she is forced to ask for help from an agency.  She is sent to live with a dysfunctional foster family.  The father deals in drugs. The mother spends most of her time in an alcoholic stupor, the son, Jon, obviously has behavioral issues.  The only nearly normal one is another girl, J.J. who is actually a niece of the woman.

Grace meets Mike, a young man who is on the run with his petty thief father, but she doesn’t find that out right away.  Mike wants nothing more than to settle down and live a normal life.  Grace has no idea of what normal looks like, but she is fairly content with the way things are going for her. That is, until the kids find a dead body in the river.

The kids don’t think they can tell anyone about the body without getting themselves in trouble, but Mike calls 911 anonymously so the body can be found and identified. An innocent comment by J.J. and a big mouth comment by Jon turns their world upside down and forces them to run away.

Finding truth and safety were not easy.  Running seems to be the only answer. How these teens solve their problems and solve a murder will keep the reader enthralled to the end.

I recommend it for the teen-age reader. 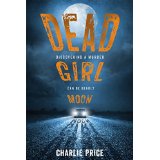