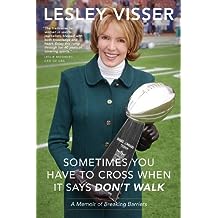 I rarely ever do not recommend a book, but that is exactly what I am doing with this one. While this book is about a highly acclaimed female sports writer (the first one ever inducted into the Football Hall of Fame) it is not a book that young people will pick up and read.

It is a memoir of the life of a woman in her 60’s. There are no chapter titles to help the reader find things. There is no index. There is a chapter of acknowledgements that goes on for 12 pages that are mostly a list of names – page, after page of them.

The writing is rambling and very disjointed. A written organization of some sort, perhaps chronological or a type of sport being covered would perhaps have helped. There are at least seven pictures that are clearly labeled, but the person standing with Lesley in these pictures are NOT mentioned in the text where they are placed. All pictures are grainy, but that might be better in true publication because the copy I read is an advanced publication. I see no possible use for this book in any school library.

Aventurine is a young female dragon who wants to explore the world outside her family’s lair. Her adventure into the unknown has disastrous results when she meets a food wizard who gives her enchanted chocolate which turns her into a human.

Aventurine falls madly in love with chocolate and wants more of it. She eventually is taken in as an apprentice to a famous chocolatier and begins to learn how to make the best chocolate in the kingdom. She also makes a friend of a young girl in the town.

Unfortunately, her dragon family is trying to find her, and Aventurine must decide how to stop them from destroying the world she must now live in. This is a cute story for elementary readers, grades 3-6. I recommend its purchase because it is a very unique approach to dragon tales.

This book is actually a sequel to The Forgetting, but it can totally stand alone. In this story over 300 years have passed since the first pioneers from Earth arrived aboard Centauri I at the planet they had called Canaan.  Now explorers from Earth have once again arrived on a ship called Centauri III.  Their job is to see how the original pioneers have done in building a new civilization on the new planet. They are directed not to interact with the inhabitants – only to observe and report their findings.

Of course, Beckett and Jillian, the two young observers from the ship, find themselves in a situation that demands that they get involved. How they interact with Samara, a girl from the city of New Canaan, moves the story along to a most unexpected conclusion.

The people who live inside of New Canaan are incapable of forgetting anything – even pain and emotions.  They remember everything except for what happened 300 years ago.  This constant bombardment of remembering leaves them incapable of developing emotional attachments because the loss of someone they love causes them tremendous emotional pain every time they think about that person.

On the positive side, they never forget anything that they have read, seen or heard which makes Samarra extremely important as Beckett and Jillian as they try to find out what really had happened to the people on Canaan and to keep the rest of the explorers on board Centauri II safe.

There is nothing about this book that would cause reservations about its purchase for the high school library. It does contain violent scenes, but sex and language are absent. If you have not already read The Forgetting, you will want to do so after reading this book.

The author leaves the reader wondering about what happened to the ship Centauri II. Another spellbinding tale must be forth-coming.

Mailee and Cars are two high school best friends who always look out for each other.  They both have issues that cause them to rely on each other.  Cara, the logical organized one, gets drawn into a survival cult that is living in the mountains near their town.  Mailee is not pleased with the was Cara is getting involved with the cult, but she is unsure about how to help her.

Cara invites Mailee to visit the commune, and Mailee becomes even more uneasy when she meets the leader of the group. Mailee stumbles on something outside the camp that terrifies her.  She knows she has to get Cara away from the group, but her effort to do so may get her killed.

The price that one must pay for true friendship[ is the theme of the book.  The characters are very well developed, and the plot is tightly constructed.  There is some sex alluded to but nothing graphic.  I highly recommend its purchase for the high school reader.