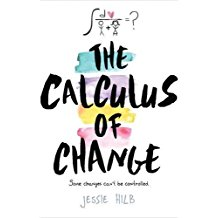 Aden has a great relationship with mathematics, but the rest of her life is up-in-the air. The family is still reeling from the loss of her mother. Her best friend is boy-crazy and intent on starting an affair with one of her teachers. Aden has never dated and thought that part of her life was fine until Tate came into her life. Tate wears his yarmulke and a grin to school and is a friend to everyone. Aden is fascinated by him – especially that he is not afraid to openly display his religious convictions.

When Tate needs help with his calculus class, Aden steps in and helps him with his homework. Aden knows she is drawn to Tate, but he is dating another girl. I was feeling very impressed with Tate and Aden’s relationship at the start. He talks to her about his faith (She is also Jewish), and takes her to meet with a rabbi. But I lost that view of the relationship when he invites her to his house one night, gives her alcohol and proceeds to have sex with her. Worse yet is the fact that he gets up and leaves her in the bed with no explanation, does not even tell her ,”Goodbye.”

The redeeming part of the tale is that this did not destroy Aden, but she realizes that she cannot be around Tate. Girls who read this may understand that they don’t have to get “mushy brained” about love relationships.

I believe this must be an informed purchase for the high school library. The characters are very believable, and there is an over-all good resolution. However some schools may object to the sexual scenes. Also, the best friend does have sex with the teacher, but does not in trouble for it. The friend, Marissa, becomes pregnant, but she also had sex with another student about the same time so the fatherhood of the child is unknown. The teacher tells Marissa that his wife forgave him and that he is staying with her. That resolution bothers me. I don’t want to NOT recommend the book, but if it is purchased, it definitely needs to stay in the high school library.